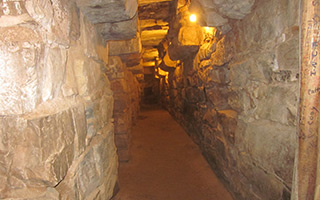 Driving to the south / east of huaraz making some pauses in the way to one of the first is next to the lake querococha 3900m where we have short break to have some coca tea and take some pictures from the scenery ,driving up to the highiest point of the tour called tunel de cahuish 4516m (tunnel over 4516m) which divided two different valleys valle de los conchuchos and huaylas well-known as continental water divided, we drive across the tunnel and descend down to the archaeological site of Chavín de Huántar which was the administrative center and principal temple of the Chavín culture, the oldest major culture in Peru existing from around 1200 to 300 BC.

The site of Chavín de Huántar is an incredible feat of engineering, with most of the construction being built underground in an extensive labyrinth of interconnecting chambers and tunnels. The Chavín culture was the predecessor to and a larger civilization than the better known and more short lived Inca Culture which developed many hundreds of years later, inheriting the immense astrological and architectural knowledge from the Chavín ancestors. You will be left amazed at how the ancient culture managed to so accurately construct its building and to lift and fit the massive blocks of stone without the aid of modern building techniques and machinery. combining meeting friendly local people living in remote villages with spectacular countryside and ancient culture and history. Finally we visit the museum where we can find some original sculptured stones, seashell and more... drive back to huaraz taking the same way